A critical element to effective language learning, in fact to any learning, is feedback. Without feedback, we just could not learn. We would not know the results of our actions and hence would not know if any adjustment was needed. Feedback is what tells us whether we are on the path leading to our intended destination or have deviated. It is what tells us whether we have achieved our mark or not.

We need to recognise feedback in all areas of learning languages, from the sounds we make to the sentences we form, to the meanings we intend to utter, to the writing that we do and so on. It is too easy to overlook the importance of feedback and concentrate on learning more and more. I have seen language learners accumulate enormous amounts of knowledge about language and a variety of language skills but they don’t seem to be able to put it all together. One reason for that is that they have not been using the feedback they get to effectively and appropriately modify what they do, say or learn.

There are 2 kinds of feedback:

1. The kind that we perceive through our senses and perception.

2. The kind we are given by others, such as our teachers, peers or even, these days, computer programs. 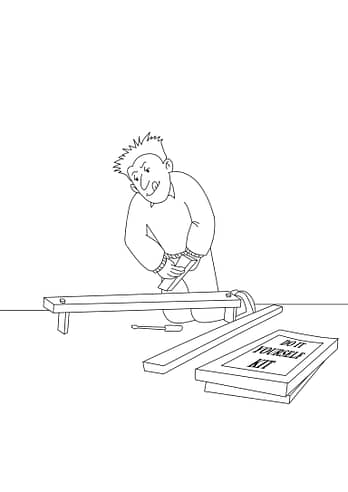 When we were learning our first language, 98% (Ok, this is not scientific! But it is an extremely high percentage though, to be sure) or more of our language learning happened via the first means. Parental input is always talked about as being important, especially in the beginning. However if one considers the breadth, complexities and subtleties of any language, it is clear that children learn nearly everything through their own devices.

We can go further into the notion of how important our perceptions are for our own learning. Just consider, a lot, if not virtually all, of what we learn about how to make our relationships work (with our parents, friends, colleagues, children etc) is learned via our powers of noticing. It is through noticing that we get the feedback which informs us about:

Say, for example, we say something that we don’t see as disrespectful, but others do. An example might be saying something like, “I don’t believe you”. When we don’t recognize the feedback we are given after we say this, we probably will keep repeating this kind of sentiment in other similar kind of situations where we disagree.  This will only stop when we recognise it ourselves as being a bit too abrasive, or when we become aware of some feedback from the person we were talking to ( like a raised eyebrow, unexpected silence, etc).

Virtually no one goes to classes about learning from life (though of course it could be argued that we would be better off if we did! 🙂 ). However, we learn an enormous variety and amount of skills and understandings. The more we look at our lives, the more it becomes apparent that it is only in very limited situations do we ever turn to teachers to help us learn.

Check out this new feedback service we are offering
to English language learners on their pronunciation.

Feedback put to good use and to no use!

Let us look at an example of what happens in the learning of pronunciation.with:

A. An effective language learner

You want to say “cart”. When you utter it, you notice that the sound you make in the middle of the word does not approximate to the sound that you hear others make. You notice this because as you listen to yourself and listen to how others say the sound, you notice a difference. To make the right sound you start experimenting with moving the sound around your mouth and by varying the length of the sound. After some time you realise that by

you can make the transition, from “cut” (what you are saying before) to “cart”.

Feedback is the information that comes back to you ( from yourself or from someone else), which you can take and use to refine what you do. Of course you can also chose to ignore the information. Recognising it is the first part, but without acting on it, no change will happen.

B. A poor learner

This kind of learner does not change their pronunciation until someone instructs them to. S/he continually repeats the wrong pronunciation and remains oblivious to the problems. They may change what they say because: 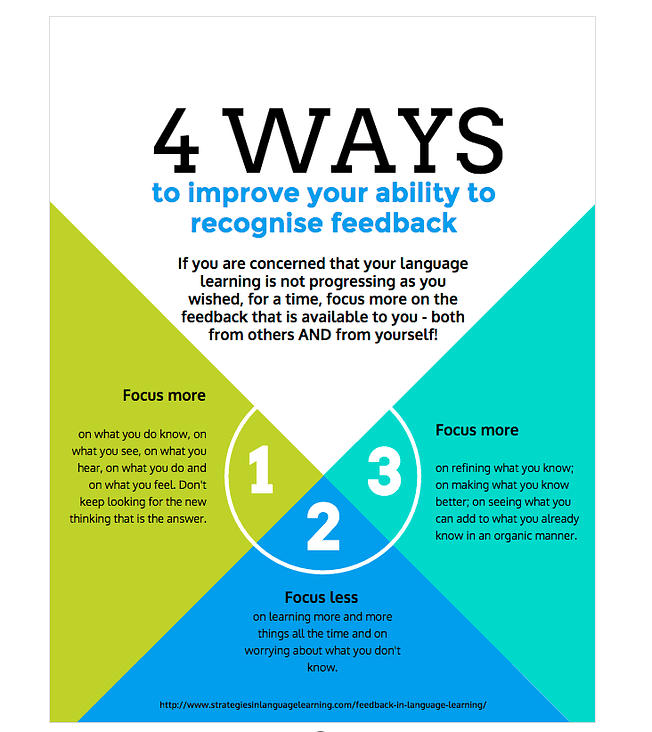 This kind of learner is looking for correction from their teacher but do not realise that they can correct themselves.

The two kinds of learner that I have just described are two extremes and the reality is that we sit somewhere between these two extremes.  At different times we get closer to one end and at other times, we may be closer to the other.

Factors that encourage or inhibit feedback

It is how attentive we are to the information that comes our way that permits us to learn from what we do. This can be readily seen with infants. Sometimes we may not take notice of or learn so well from our experiences, so we keep on repeating the same “mis-takes”.  This can happen not just because we are not attentive but also if, for example, we(in no particular order):

If some of these forces are at play in our lives then our learnings may well be constrained and limited. In these situations, we may not recognise the feedback that is coming our way. Hence we may only confirm what we already know or see some distorted picture, instead of seeing things as they really are.

Another significant issue is that as a result of our schooling, a belief that only feedback of the 2nd type (experienced as formal learning) can result in learning becomes the dominant belief. At school, we are so used to looking to the teacher for guidance, for input, for feedback that our ability to guide ourselves from our perceptions and feedback diminishes and in some instances may even get lost.

This is not the inevitable outcome of formal education I hasten to add. It is the result of the type of education that most of us have been subjected to.

An excellent timeless book, written some ago, looking into this in a lot more detail is How Children Fail by John Holt

Although all of us learn so much outside of formal education, the classes we were in can and do have powerful effects on our perceptions about what learning is. One of these is the belief that teachers are the only ones who can provide the sort of input ( including feedback) that we need. This is despite that fact that so many of us have had teachers who gave us negligible feedback or feedback of the kind that only disheartened us.

From all these experiences at school, most of us learn to devalue our own input. The understanding that we, in fact, can learn all the time through what we do and the feedback we get from that is too easily lost. How we can learn languages through whatever we do is something that most people do not easily come to once they have been consciously and unconsciously shown that that the “teacher”, the books and the courses knows best. The value of our own immensely powerful learning system is ignored.

Even when they learn by themselves, most people turn to the kinds of exercises that we associate with language classes. Many people regard this as real learning. The other kind is not usually given the importance it deserves.

Very few teachers themselves understand the importance of informal learning in the life of language learners, so it is only in the rare classes that learners are actually shown how this can work. The students hence are not shown to value the feedback they receive when they are talking to shopkeepers or their neighbours, when they are reading books, when they are watching movies and when they are on Skype and so on.

In fact, this is a key reason why there are such poor results in many classes. Many students keep waiting for the teacher, the exercise, the book to help them, rather than understand that it is what they do with what they hear or read (including from the teacher) that can create the results they are looking for. Or they think they have not learned enough, or they are poor learners. They don’t tend to think that the way I am approaching learning is the problem.

Even when the teacher is giving feedback, the learner can miss the value. The value can be missed for any number of reasons, including:

Once we learn to value feedback we start to be empowered language learners. We can then learn from anything we do, see hear or feel. We then keep learning rather than get stuck at a level far below what we wanted. Each new learning can then open up new areas for discovery, areas that before would not have been evident. This is the power of valuing (and learning from) feedback.

“The things that have been most valuable to me
I did not learn in school.”
Will Smith