Age is no barrier to learning a language

Age is no barrier to learning a language

There would be very few people who approach speaking a new language with no fears. Fear of making errors and hence making a fool of ourselves is one of the more common fears that slows down most language learners. In fact it is one of the main factors that prevent many people from learning it as they simply do not get enough chance to use it. So if you are one who finds that your fears are holding you back, read this post and see if there is anything here that can help you learn to overcome them, so you can become more confident and successful in speaking the language you are learning.

Fear is one notable difference between learning our first language and subsequent languages. At the time of learning our first fears have much less of an influence on our learning and prevents no one from learning it. It is only once we develop our ego do problems start to appear. 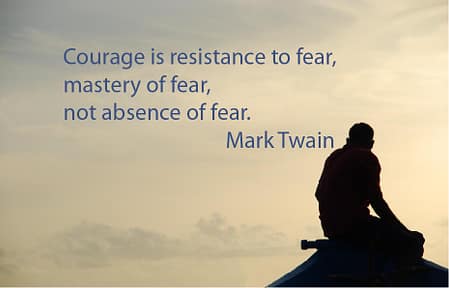 The reality is that all us of develop fears and some even phobias. Even the most famous and heroic of peoples (Julius Cesar to Nelson Mandela to Oprah Winfrey to Steve Jobs all have fessed up to having fears). One of the biggest ones that most people seem to have is the fear of public speaking. I have seen some studies that report people as saying that they fear that more than they fear death! There are many fears that people can have about their self and performance. Here are a few:

Some people just learn to deal with them in a way that does not halt their progress.  Others may struggle with them throughout their life. You may run away from facing them however once you start learning a language, it is inevitable that you will come across some fears that maybe you have managed to avoid facing before.

One reason why so many people like studying languages, in the formal sense of that expression, is that there is much less chance of making a fool of themselves in front of other people. Somehow one is less exposed. We can do exercises and make mistakes, all in the comfort of our own space, not in front of others. People may work like this with with the vain belief that if they study hard enough somehow all that effort will be magically transmuted into speaking skills. I am not saying this is impossible…but I suspect close to it. Humans are such amazing beings that nothing can be ruled out! (As is said, truth can be stranger than fiction – for good reason).

The reality is that as with any skill, we need to use it to improve it. Studying it is no substitute for use. Just imagine studying driving a car. Will that enable you to become a confident skilled driver?

Speaking presents different challenges. Speaking a new language seems to expose who we are, as there appears to be nothing between who we are and who others see. In a first language we may use language to hide who we are. ( Not that this is a good idea!!) When learning a second language, that is not really possible at the start and much more difficult even later on. We are exposed, warts and all, as we don’t have the language skills to do anything else.

In a foreign language environment you can somehow avoid facing the fears by giving away learning languages. However when you emigrate to a country with another language, the repercussions of not succeeding in learning a language can be enormous. Not only can this effect your sense of self worth but can also affect your relationships and family, not to mention possible career and financial repercussions.  So overcoming these fears are of paramount importance, if you are to live a fulfilled life in the country of your choice.

Fear is destructive in so many ways. It can be immobilising prompting us to withdraw, question ourselves and our worth. People can put off facing their fears only for so long before their self image is substantially affected and before they know it, they may start saying things like, “I am no good at language learning” to justify their fear and “inability” to face their fears.

There are only a few ways to respond to fear. We can avoid our fears. We can do this in any number of ways including by stopping what initiates fear, justifying this with any number of plausible reasons. As is said. if you say something often enough, you end up believing it.

The only really effective way to deal with fears so that we overcome them is to face them one by one with whatever courage we can muster. Then we can keep moving forward.

How to Face Fear

The first thing to do is to admit your fears. This may sound easy, but it is not if we have spent a lot of time trying to avoid facing them. Without that admission, learning to deal with them becomes much more difficult. We can cover up our fears by creating beliefs that are just that, a cover. Once we have done that, the whole issue becomes murky and needing to be unpacked.

Accept fear as the price of moving ahead. Summon whatever courage you can find to step forward. It may seem impossible. Your feet might feel stuck to the ground and your mouth frozen but by making a step forward and, for example, initiating conversation you show yourself it can be done. Once of course is not enough. If you persist, you WILL see it does become easier. The fears will subside slowly and each time you step forward, you will strengthen yourself in many ways.

It helps to have a burning desire to learn the language. Building this desire or passion is critical to your ability to overcome your fears. Desire propels you to go where you’re afraid to go and to do what you’re scared to do. Do you remember talking to the girl/boy you were first attracted to? How long did you take to do it? Was their fear? Of course…but the desire was so great that you eventually took the step!

By facing a fear you will be better equipped to handle other fears as you see that fears are not impenetrable walls, but just obstacles to be overcome. Each victory over fear adds to your confidence and helps you to overcome other fears that may appear.

You may not be able to eliminate your fear, but you can weaken its grip by strengthening its opposite, courage. Feed the right emotion and starve the wrong one. We have both fear and courage within ourselves. We can weaken the emotion of fear by taking away whatever feeds it.  When we feel fear, but nevertheless act, we deprive fear of nourishment and we strengthen our impulse to be courageous.

Eleanor Roosevelt said “You gain strength, courage, and confidence by every experience in which you really stop to look fear in the face. You are able to say to yourself, ‘I lived through this horror. I can take the next thing that comes along.’ The danger lies in refusing to face the fear, in not daring to come to grips with it. If you fail anywhere along the line, it will take away your confidence. You must make yourself succeed every time. You must do the thing you think you cannot do.“

So if fear is slowing down your progress in learning languages or is making you think you want to give it away, don’t regard fear as an unchangeable part of your personality. It is possible to reduce its effect, many have done so. Just acknowledge that you need to deal with it. Once you make that decision and go about doing what it takes, you will be amazed at just what is possible.

*An insightful and practical self help book, Feel the Fear And Do It Anyway, was written by a person who overcame her fears, Susan Jeffers.