How to Remember Vocabulary

How to Remember Vocabulary

Having language learning goals is one of the key strategies that successful language learners have in common.  One of the biggest obstacles to learning is the lack of a clear goal. Many learners will say, “it would be nice to learn Spanish” or “my wife’s family speaks Chinese, so I want to learn it” or “I have always wanted to learn French”. These are all good reasons for learning the language, but they are not goals. These are more like a wish list!

Without a goal to strive for, why would we ever go through the disciplines that are required to be successful? Without a goal, there is no game…football, basketball, etc. Without an end in mind, why would we give up things that might be more appealing? Many people have unconscious goals. Some have made them conscious. A few actually write them down. In a longitudinal study of Harvard University 1979 MBA graduates, they found that the 3% who had written their goals down at the end of their Master’s program were 10 years later earning 10 times more than the other 97% combined! 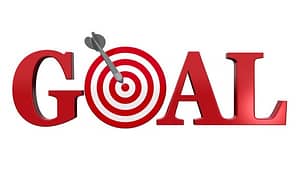 Our language learning goals also provide energy to our moment to moment interactions that transform them into learning experiences. Many language learners do a lot of exercises and practice but do not seem to move ahead. One reason for that is that they are missing the presence that comes from having a commitment.  That commitment comes from the goals we set ourselves.

It is important to say that these goals need to be in line with our values, or what is most important in our lives. If they are not, then the goals we set ourselves will probably be not effective as we have set ourselves something which in our heart is not really what we want to do.

I would suggest to you that any person who has become successful in any endeavour has had a goal (and possibly more than one). You don’t get to climb a high mountain without having the end in your mind. There are just too many obstacles, byways, and reasons why you should give up on the way!

With goals, the critical issue is to have it quantifiable. It’s not enough to say for example, “I want to learn Spanish”. It’s important to be clear about what level you want to get to. For example, “I want to learn Spanish so I can get a job in Spain” or “so I can survive doing all the necessary things in life” or “so people will not know that I was not born in Spain”. By having a measurable goal we know clearly where we are heading and hence have a much better chance of getting there.

Just imagine trying to get to a new friend’s place and you know the suburb she lives in but not the street nor the number. How successful will you be in getting there? It is the same in achieving any goal. Rather than leave it to chance, claim your success by having the street and the number! 🙂

In the next article on passion in language learning, I will examine how it is possible to put a turbo blaster on your goals!. Paying attention to your language learning goals, however, can make a big difference to your chances of success in learning a foreign language.

One of the all-time classics on goal setting. A must read if you are serious to learn more about why goals are so important and how to set them up so that you maximise the chances of achieving them.