Can you learn a new language by watching movies?

Can you learn a new language by watching movies?

What is driving your language learning, the meaning or the language?

This might seem like an odd question, but I believe the answer to this may help you understand how you may be able to improve your language learning. There are many language learners who I have come across concentrate on learning the new language. What is wrong with that you may ask? At one level there is nothing wrong with that at all. However contrast that, for example, to learning to express what I mean in another language. There is a considerable difference here.

Many language learners go about learning a language and doing all the exercises associated with language classes. There may be some of those who are able to put the necessary meaning into what they are doing and hence bring value to the exercise. However I believe many just keep it at the level of an intellectual exercise and hence the amount of value they extract from the exercise can be minimal.

At this level I am talking about language remains something to be learned, not to be fully engaged in. It remains the same as learning historical facts, or the names of the capital cities of the world. Learning a language is clearly much more than that.

It is important to understand that in the evolution of language, in the learning of our mother tongues, meaning nearly always preceded the language. There was something that needed to be named, so it was named. It is the same when an infant  wants to be understood. Once they figure out that sounds can be used for communication, they find words that they can use to express what they want. Meaning is what dictates the progress of language in infants . As they understand more and more, they find more and more utterances that they can say to match to express what they mean. Meaning was the driver (at least in the context of this discussion! ).

However in a lot of instruction, books and materials the meaning may sometimes appear secondary, and depending upon how the learner approaches the learning, even what was there can soon disappear in the effort to complete an exercise.

So learners learn to conjugate the verbs, learn the various tense forms, learn which prepositions to use but somehow the meaning is in the shadows, rather than driving the learning. This can be see in the learning, where the learner is required to concentrate on the forms of the language, rather than on expressing meaning.

The example just under here, which I found on the net, is pretty typical of what can be found on many sites and in many books. 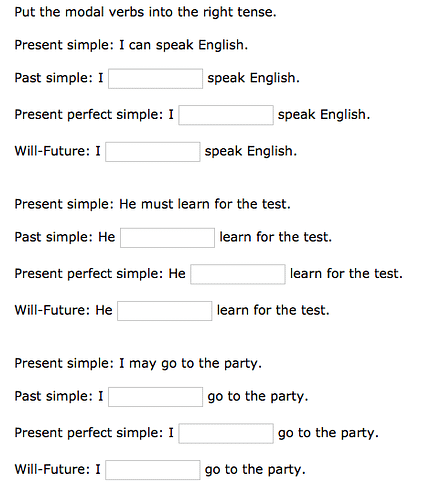 Learners may fill in the right modals, but

Compare this to creating sentences for yourself about your life and what you would like to say.

These last 2 sentences are meaning packed. The meaning I created and I put words to the meaning I wanted to convey. If you are not sure how to say something you want to say, then by all means do some research until you can say what you want to say.

This way the learner is in charge of their learning. From here you may find some exercises that might help. I think however it is much better if you think of other scenarios where a similar kind of structure could be used.

For example, I may not go to work tomorrow as my mother is flying in.

My son may not come home tonight as his car is giving him trouble.

It is important to stay at sentence level at least when working on meaning as that way your ability to use the language will be enhances. many language learners stay at the word level and have word lists. This slow down your language learning as language and meaning is seldom used in this way.

This might appear a bit slow but you are learning, in a profound way, so many things not only about the language but also about how to learn languages effectively. You are training yourself to work at the level of meaning. You are letting meaning drive your learning at the same time as being active and driving your learning. It does not always have to be like this, but this helps to train your brain to look for the right clues, to be proactive, to look for similarities and patterns, no matter how you are learning. As you get better in all this your learning will become increasingly effective and more rewarding!